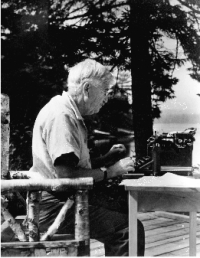 John Dewey was a prolific letter writer.  His personal and professional correspondence as well as letters written to and about him have been collected in an electronic database housing over 22,000 entries.  Dewey was a philosopher whose medium was the written word.  This meant that writing was an integral part of his daily activities.  He wrote thousands of letters, private and professional, many of which demonstrate his powerful intellect.This overview of the Center’s work with Dewey’s correspondence traces the process of collecting, deciphering, transcribing, and organizing his letters.

Highlighted from the Center’s collection of letters are examples of Dewey's letters to renowned American sociologist Arthur F. Bentley, with whom he produced the book Knowing and the Known.  Also, Dewey's letters to Albert C. Barnes, the famous collector and patron of impressionist and modern art, are shown, and Dewey's letters to William James provide insight into their relationship.

End of the Paper Trail