The Center for Dewey Studies provides an electronic resource of Dewey's correspondence. To the left are images of the original documents which are held at SIU Special Collections Research Center.

The passage below notes a few unique aspects to the process of deciphering and transcribing Dewey's manuscripts.

For letters from John Dewey, we include corrections that provide insight into his thought processes. We do not indicate typographical or hand-written corrections when they are matters of spelling. We do, however, retain letters, whole words, and phrases that Dewey crossed out as well as his replacements, including Dewey's use of carets.

Dewey's typewriting presents other problems: he typically runs off the page horizontally and vertically. Sometimes his lines slant and run into each other.

If we are unsure of a word we add brackets and an italicized question mark: [?].

The editorial staff supplies footnotes to letters indicating historical and biographical information, cross references to correspondence referred to by the author, and additional explanations. 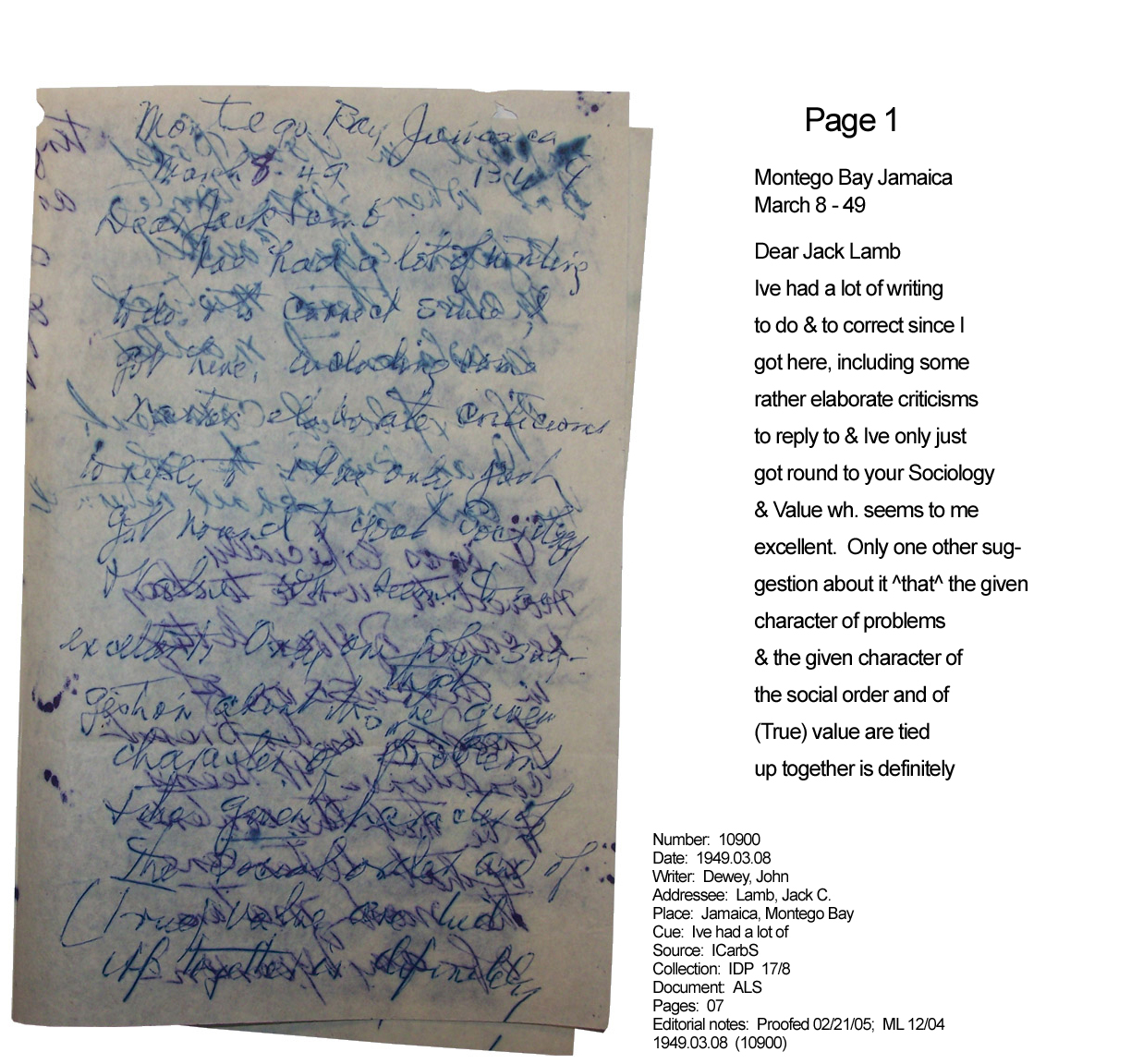 Dear Jack Lamb
Ive had a lot of writing
to do to correct since I
got here, including some
rather elaborate criticisms
to reply to Ive only just
got round to your Sociology
Value wh. seems to me
excellent. Only one other sug-
gestion about it ^that^ the given
character of problems
the given character of
the social order and of
(True) value are tied
up together is definitely

implied in your paper
but when you write
again you could
make their mutual
involvement matter
of explicit comment
I am keeping the copy
you sent me shall return it
l was especially
moved to write today
because of your letter
in discussion of
freedom under present conditions.
It seems to be that the contents
of that letter are the most mature
of any of your wri_

tings that l have read. It is
as if you felt you had
arrived at a command
of things you had been
working toward_ Your
commenton the scope
of the separations that
now pervade life marks
a decisive insight that
wont fail you. All l have
read of Weber is the
translation of selected
portions by Gerth
Mills_pub|ished in 454
or 45 in Ny_ I was a
little surprised by some 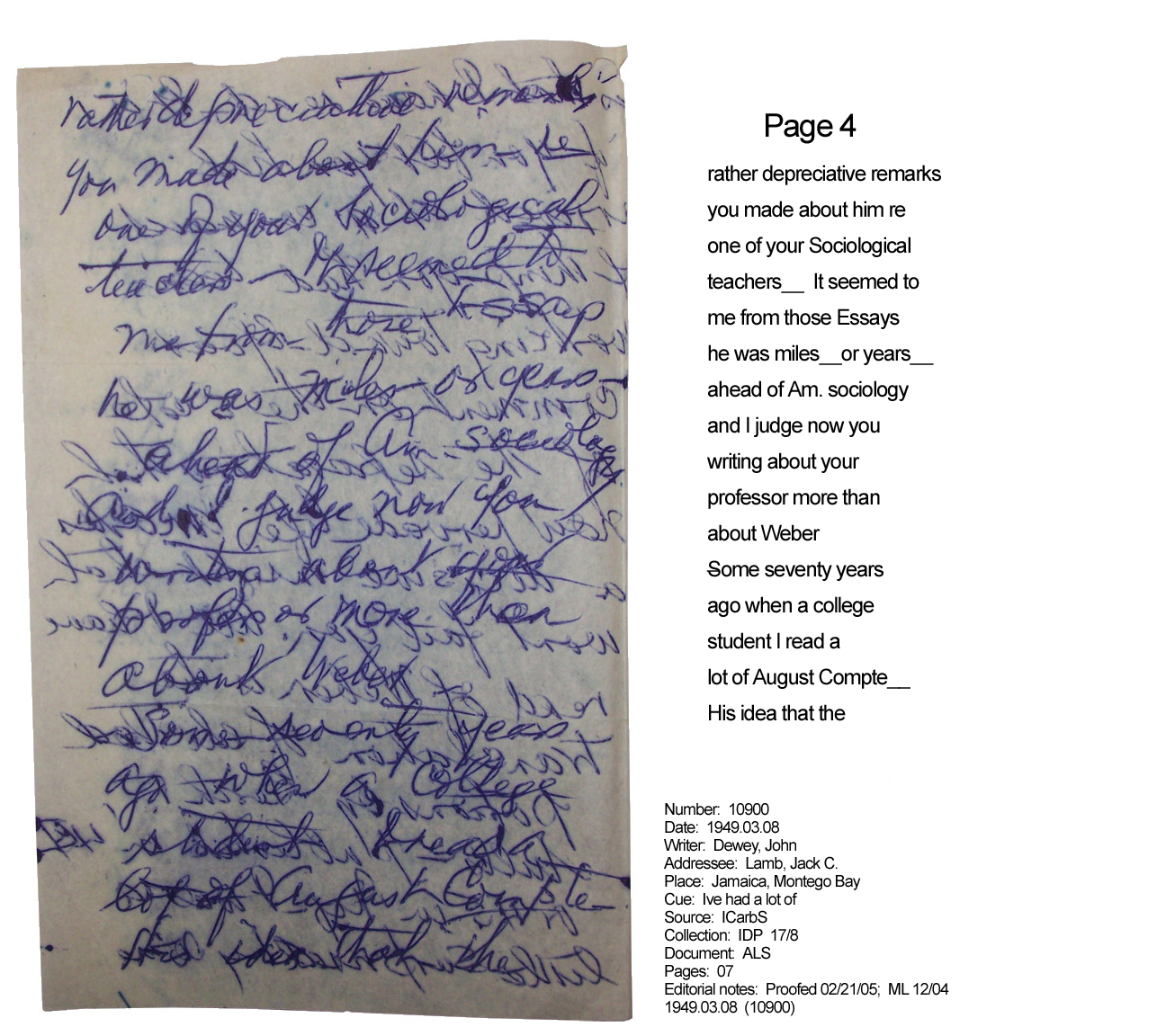 rather depreciative remarks
you made about him re
one of your Sociological
teachers_ It seemed to
me from those Essays
he was miles_or years_
ahead of Am. sociology
and I judge now you
writing about your
professor more than
about Weber
Some seventy years
ago when a college
student I read a
lot of August Compte_
His idea that the

natural sciences (physical biological) should be "synthesized" not in their own terms but in terms of their relation to human issues (sociology I think invented[?] the word) has I suppose permanently inﬂuenced me But what I refer to him for is that he must have been a contemporary of Marx_ he was very critical of orthodox economics _made fun of it_and probably knew nothing

of Marx but his saying that the problem of contemp- orary society was to [illeg.] incorporate the proletariat into itself has the same background I think as Marx‘s separation of the worker from his work all that is human about it_ If I recal Weber‘s last writing was about 1905_and if sociologists are now

catching up with him it is all to the good_ I think I ^have^ mentioned Adelbert Ames to you his remarkable experimental demon- strations in perception_ He has branched up out into generalizing his results_ They prove the transactional character of all our perceptions of the world in which_ of which_ we live_ He sent me some of his general writings Ill pass them on to you.Sincerely John Dewey