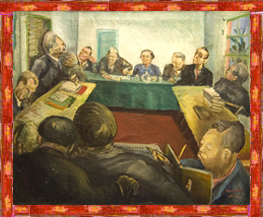 Dorothy Eisner (1906-1984) expressed, as well as documented, Leon Trotsky's (1879-1940) testimony before the 1937 Dewey Commission investigating charges made before him in the Moscow Trials.  Eisner was an art activist and a founding member of the Federation of Modern Painters and Sculptors.  Eisner painted two portraits of Trotsky as well as the Commission painting.  Trotsky, Dewey, and Diego Rivera figure prominently in the painting.  It is interesting that Rivera is sketching the scene of the group which was painted in Frida Kahlo's house.  Diego was an important figure in the arts and politics of the early 20th century.  His mural work in Mexico City, Detroit, San Francisco, and New York City are known for their progressive views of working societies.